Some keys (G2 - C3) on my old 61-key Yamaha PSR keyboard quit working so I spent a Sunday afternoon fixing it. It took me a while to figure out what the problem was. I share what I learned here, so perhaps somebody out there can save their old keyboards, too.


Dissecting the keyboard was pretty straightforward -- just unscrew everything on the bottom of the keyboard.

Underneath the keys that our fingers press are a layer of rubber buttons that short the switches. 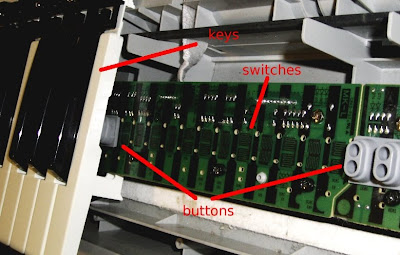 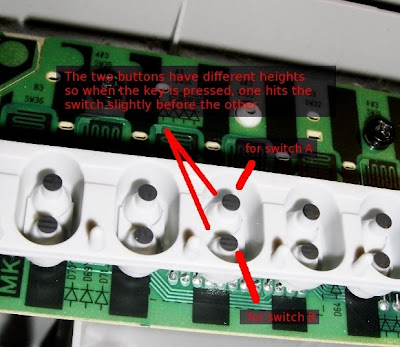 Since F=ma (Newton's 2nd law of motion), m is constant, and the depth difference of the buttons is also a constant, it means the harder we hit the keys, the higher acceleration the keys move, and the shorter the time it will take button B to hit switch B, after button A hits switch A first. With normalization (depending on how the sound samples are handled), this timing difference can be interpretated as intended dynamic.

The mechanism of the keyboard is a very clever design. Now I need to figure out what's wrong with those keys. The fact that keys in a row stopped working at the same time is a strong hint that they must share a common signal path. Originally I thought there must be some complicated multiplexing to encode all the keys to optimized output points. However, on this circuit board there are only simple diodes for each switch; no binary encoding. 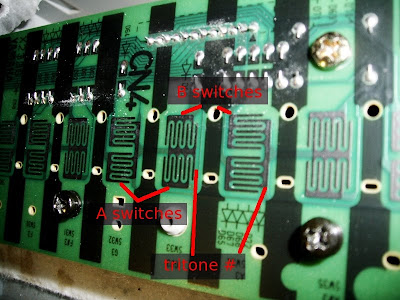 I noticed switch A and switch B both connect to the same contact that I first thought to be the common ground -- that way, we would need 61 keys * 2 switches = 122 output points.  However, attached to the lower half of the keyboard are two ribbon cables: 7 pins and 12 pins; and the upper half has another 4 pins, and shares the same 12 pins on the lower half via parallel connection. This is far less than the output points we need. 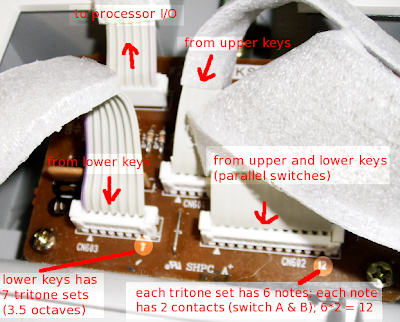 Now the numbers add up. And it became obvious that the bad keys (G2-C3) share tritone set #3 (the lowest note C2 alone is tritone set #1; C#2-F#2 is tritone set #2).  Tracing the path, I found some contacts' rust broke the circuit line.
I ended up having to jump short, with a wire, the ground of tritone set #3 to pin 3 of the tritone ribbon cable. It was not easy to solder wires to old printed circuits so I had to get creative. Anyway, by making use some of the unused holes on the board and some glue, I was able to keep the wires in place and brought those keys back to life.
Posted by TK at 02:13